After Abraham died his descendants were called Israelites.  500 years later they have become a large tribe.  But they have also become slaves  of the Egyptians.


The Israelite leader is Moses. God had told Moses to go to Pharaoh of Egypt and demand that he free the Israelites from slavery.   This began a struggle between Pharaoh and Moses producing nine plagues against Pharaoh and the Egyptians. Even so, Pharaoh had not agreed to let the Israelites go free so God was going to bring a deadly 10th plague. The full account of the 10th Plague in the Bible is linked here.

The 10th plague was that every firstborn son in the land would die that night from God’s Angel of Death – except those who remained in houses where a lamb had been sacrificed and its blood painted on the door frames of that house. If Pharaoh did not obey, his firstborn son and heir to the throne would die. Every house in Egypt that did not sacrifice a lamb and paint its blood on the doorposts would lose a firstborn son. So Egypt faced a national disaster.

In Israelite (and Egyptian) houses where a lamb had been sacrificed and its blood painted on the doors the promise was that everyone would be safe. The Angel of Death would pass over that house. So this day was called Passover.

People think that the blood on the doors was only for the Angel of Death. But notice what the Bible says

Though the LORD was looking for the blood on the door, and if He saw it Death would pass over, the blood was not a sign for Him. It says that the blood was a ‘sign for you’ – the people, including you and me.

But how is it a sign? After this happened the LORD commanded them to:

Celebrate this day as a lasting ordinance for generations to come. When you enter the land … observe this ceremony… It is the Passover sacrifice to the LORD’ (Exodus 12:27)

In fact we see at the beginning of this story that this 10th plague began the ancient Israelite (Jewish) calendar.

Starting at this time, the Israelites began a calendar that celebrated Passover on the same day every year.  For 3500 years Jewish people have been celebrating Passover every year to remember how their ancestors were saved from death.  Since the Jewish calendar year is a little different from the Western calendar, the Passover day moves each year on the Western calendar. 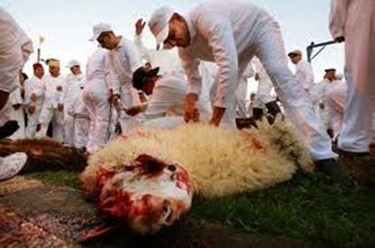 If we follow Passover celebrations in history we will realize something remarkable. Notice when the arrest and trial of Jesus happened:

“Then the Jews led Jesus … to the palace of the Roman governor [Pilate]… to avoid ceremonial uncleanness the Jews did not enter the palace; they wanted to be able to eat the Passover” … [Pilate] said [to Jewish leaders] “…But it is your custom for me to release to you one prisoner at the time of the Passover. Do you want me to release ‘the king of the Jews’?” They shouted back, “No not him…” (John 18:28, 39-40)

Jesus was arrested and executed on Passover of the Jewish calendar – the same day all Jews were sacrificing a lamb to remember those lambs in 1500 BC that caused Death to pass over.  Remember from Abraham’s Sacrifice, one of the titles of Jesus was:

Jesus, the ‘Lamb of God’, was sacrificed on the very same day that all the Jews alive then were sacrificing a lamb in memory of the first Passover that started their calendar.  This is why the Jewish Passover  occurs at the same time as Easter.  Easter is to remember the death of Jesus and since that happened on the Passover, Easter and Passover happen close together.  (Since the Western calendar is different they are not on the same day, but usually in the same week).

Think back to that first Passover in Moses’ day where the blood was a ‘sign’, not only for God, but also for us.  Think what signs do by considering these signs.

When we see the ‘skull and crossbones’ sign it makes us think of death and danger. The sign of the ‘Golden Arches’ makes us think about McDonalds. The ‘√’ on Nadal’s bandana is the sign for Nike. Nike wants us to think of them when we see this on Nadal. Signs are made to direct our thinking not to the sign itself but to something it points to.

God had said to Moses that the first Passover blood was a sign.  So what was God pointing to with this sign?  With the remarkable timing of lambs being sacrificed on the same day as Jesus, the ‘Lamb of God’, it is a sign pointing to the coming sacrifice of Jesus.

It works in our minds like I have shown in the diagram here about me. 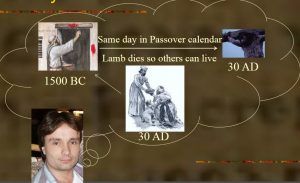 With Abraham’s sacrifice the place where the ram died so Isaac could live was Mount Moriah – the same place where Jesus was sacrificed 2000 years later.  That was given so we could ‘see’ the meaning of his sacrifice by pointing to the location. Passover is also pointing to Jesus’ sacrifice, but by using a different sign – by pointing to the day of the calendar – the calendar started by the first Passover.  In two different ways the most important stories in the Old Testament are pointing directly to the death of Jesus using sacrificed lambs. I cannot think of any other person in history whose death (or life achievement) is so foreseen in two such dramatic ways. Can you?

These two events (Abraham’s sacrifice and Passover) should show us that it is reasonable to consider that Jesus is the center of a Divine Plan.

But why has God placed these Signs in ancient history to predict the crucifixion of Jesus?  Why is that so important?  What is it about the world that requires such bloody symbols?  And is it important to us today?  To answer these questions we need to start at the beginning of the Bible to understand what happened at the start of time.